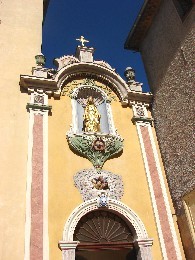 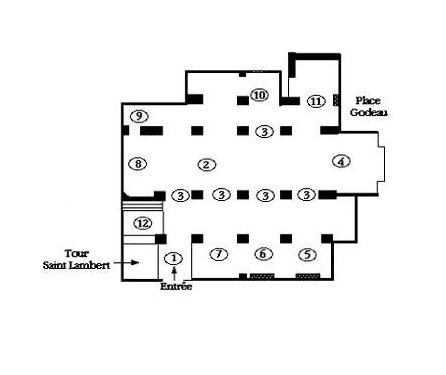 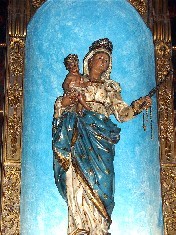 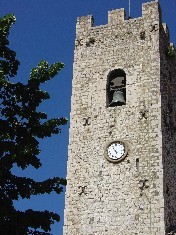 1- On the right in the wall, a piece of a Carolingian sculpture illustrates a bird drinking in an amphora which is itself ornamented with a bird. Fragment of a Roman inscription.

2- General view of the 17th and 18th century chancel and the Romanesque nave.

Several stone slabs decorated with Carolingian interlace design (600-800) have been incorporated in the pillars of the nave and the walls at the entrance to the chancel. The organ in the North wall of the nave wasbuilt in 1871.

5- Saint Véran Chapel (Bishop of Vence in 449) : the altar is a Roman sarcophagus, which held the Saint’s body during a thousand years. Renaissance altarpiece showing Saint Véran blessing the people. 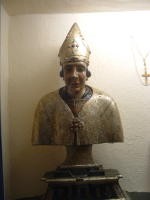 Saint Lambert Chapel (Bishop of Vence in 1154) : altar built on the Saint’s tomb. Two busts representing Saint Véran and Saint Lambertare placed on each side.

7- Chapel of the Virgin Mary.

8- Across from the nave : large 16th-century Christ (anonymous).

9- Baptistery decorated with a mosaïc by Marc Chagall, “Moses saved from the Nile” (1979). Chagall took the subject “Moses saved from the Nile” so as to express the joy of the Jewish baptism. And it’s really thejoy which radiates from his mosaic because of its clear and miscellanous colours, the flowers and fruits of the riverside trees, the women’s coloured dresses, and the sunshine with its reflection in the water. 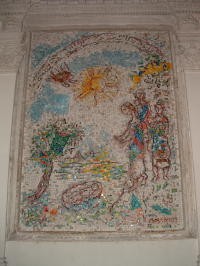 That joy is getting sweet and pure in the look of the Pharaon’ s daughter and also in the tender gesture she is making when she is bending over baby Moses to welcome him.The joy coming from the mosaic is not simply an earthly joy; it transposes the episode of the Exodus to raise it to the spiritual joy of the baptism. The Pharaon’ s daughter who welcomes little Moses then becomes the Church which welcomes a new born child who then becomes a child of God thanks to the Nile holy water. This is how we must understand the mosaic since Marc Chagall put some unusual elements to evoke the biblical texts : an Angel beside the sun and especially the rainbow. This celestial bridge is the traditional sign of the alliance between God and his people.In the baptistery of Vence,”Moses saved from the Nile” is really the prefiguration of the spiritual Sacrament.

10- Altarpieces of the Guardian Angel (16th century). This chapel was originally at the base of the church tower. 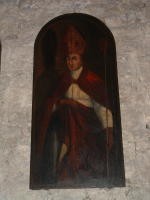 The Blessed Sacrament Chapel : you can see one of the most beautiful sculpted Carolingian plaque in France. The upper one represents either a phoenix (symbol of resurrection) or an eagle(symbol of Saint John). The lower one is in marble : some twists wrap realist or stylised birds, helix patterns, eight petals rosettes and eve bunches of grapes. Two wood paintings undoubtedly representing Saint Veran and Saint Lambert must have already decorated the doors of these two saints’reliquary in 1637. On the right, the old door of provostship dating from XVth century was set in the wall of the church tower.

12- Access to the stalls (occasional opening). They were ordered to Jacques Bellot, a cabinetmaker who carried out his work from 1455 to 1460. After being changed, they were only put in the gallery in 1499.

They are an excellent example of XVth century sculpture onwood in Provence. They enable you to reach the Treasure Room where youcan see one of Godeau’s chasubles, a bishop’s crosier, the heart cross of the Lord Bishop of Pisani and a manuscript written in Gothic relating Saint Lambert’s life. 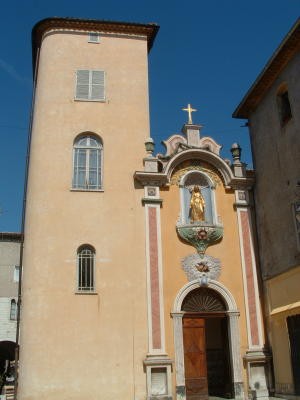 Saint Lambert tower (12th century) on the left of the Cathedral entrance. From Place Godeau, the former parish cemetery, fine view on the Romanesque chevet and the crenellated bell tower (19th century).