Créabus is a service which assures public transport facilities on demand during off-peak hours from 9am to 12pm and from 2pm to 4pm, from Tuesdays to Saturdays, throughout the year.

This public transport system functions by reservation only. Simply call, up to one hour before departure on : 08 1006 1007
Indicating the day, the time, as well as the bus stop required and the final destination.

It is recommended to reserve your one way or return ticket in advance.

Normal fares apply to Créabus. All tickets and passes which are valid on the Ligne d’azur public transport system are accepted.

** A new shuttle service to the town centre 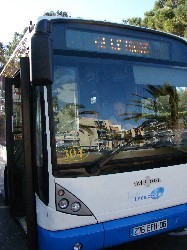 A new «Shuttle Service 48» has been introduced since June to serve the town centre, running from the outlying areas of the Baou des Noirs to the Ancien Chemin de Saint Paul.

This service will be in operation until September, available from Monday to Sunday. The fare is 0,65€, with shuttle services running every 40 minutes.

This local shuttle provides a service to the town centre.

Pick-up points along the Avenue de la Résistance and the Avenue Marcellin Maurel are «on demand ». On this part of the route, the shuttle can be stopped by simply raising the hand.

This shuttle service provides easy and economic access to town saving on time and parking fees. 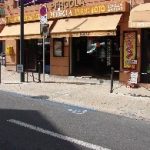