Saint Bernadette Chapel. In the past it was Saint Jacques Chapel. It is part of the old hospital of the same name, which is today a public home for old people, dating from the XVIIIth and re-shaped in the XIXth century by the charity of the sisters of Nevers. To be seen : an interesting set of furniture, and a gilded virgin in wood dating from the XVIIIth century. There was earlier, close to this chapel, the Chapel of the Black Penitents, built in 1643, which was demolished at the beginning of the century to make way for the tramway Vence-Cagnes also pulled down in 1932.

Saint Elisabeth Chapel.The Chapel of Romanesque style, dates from the XIVth century. The frescos decorating the arch date from the XVth century and are assigned to Jacques Canavesi (itinerant painter, native of Turin), and illustrate in particular hell. A still-life retable can be seen behind the altar; it depicts the meeting between Saint Elisabeth and the Virgin Mary. The bell-tower in polychrome tiles inspired by the one of the Penitents Blancs dates from the XIXth century. It is at this time that the peasants of Vence made Saint Elisabeth the protectress of their fields. As in many rural chapels, the porch used to serve as a shelter to travellers and to peasants who stored corn and beans.

Saint Lambert Chapel. The local tradition relates that Saint Lambert, Bishop of Vence from 1114 to 1154, enjoyed coming here to commune with himself and pray while quenching his thirst at the nearby spring. Very quickly, this spring became well-known for accomplishing miracles. A chapel was built and until the XIXth century, it was a very busy place of pilgrimage. The original chapel no longer exists, the current one was born from the devotion of the Vençois to Saint Lambert, their Patron Saint. It was built within 2 months with the participation of nearly the whole population and inaugurated in May 1881 by Monseigneur Terris, Bishop of Frejus, as Vence was no longer a diocese.

Sainte Colombe chapel, among vines and olive trees. This chapel is probably one of the oldest religious buildings of Vence. Its construction may date from the High Middle Ages. With the adjoining lands, it formed a priory. To be seen: its bell-tower of polychrome tiles of the XVIIth century. A mass is given there each September. The chapel was restored thanks to an association of the area. 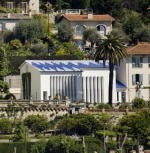 Rosary Chapel. Discreet, the chapel is noticeable for its roof of white and blue tiles and by its wrought-iron cross of 13 metres high, with crescent of moons and gilded flames. Surrounded by religious people, advised by architects, having recourse to the skills of contractors and craftsmen of Vence, Henri Matisse worked for four years from 1948 to 1951 to prepare the plans of the buildings and all the details of its decoration. For the first time a painter created a building in its entirety, from the architecture to the furniture and to the stained glass. At the opening days and hours of the chapel, enter this exceptional place: simple, bathed in light, spacious and balanced, the interior of the chapel may be defined in this way. The altar is placed at the centre of the space and faces the two naves. The color of the stone in which it was built reminds one of the Eucharistical Bread (stone from the Gard). The walls, the floor and the white ceiling contrast with the stained glass. This stained glass are made up of three colors: yellow (the color of light and that of God), green (nature) and blue (the Mediteranean sky). Three major works made in outline drawing on white ceramic decorate the walls of the chapel. Only the reflection of the stained glass colors these three compositions: «Saint Dominique», «Virgin and Child» and «The Stations of the Cross». The first stone of the chapel was placed and blessed by Monseigneur Rémond, Bishop of Nice, 11th December 1949. The inauguration and the consecration in Notre Dame du Rosaire occurred 25th June 1951. Matisse was ill and could not attend the ceremony. However he made read a text read by Father Couturier: «This work required four years of exclusive and assiduous labour and is the result of all my active life. I consider it in spite of all its imperfections as my masterpiece».

Chemin du Calvaire. In 1720, the Canon Honoré Blanc had a huge chapel built as well as ten others much smaller, each of them recalling a station of the Calvary of Christ. Today, five of them can still be seen. On the left, the first chapel known as the High Chapel, the next one on the same side : Notre Dame de Larrat. Dedicated to the Virgin Mary, its date of construction is not very well defined. Inaugurated in 1701, it is earlier than the so-called chapels of the Calvary. The chapel used to have a bell-tower, but today it has disappeared. The chapel is part of the priory to which is joined side by side and which gives evidence of the importance of this place of cult until the beginning of the XXth century. Going down this road, you will see on the right four little chapels built a short distance apart. Even if most of the chapels were left in utter neglect, you can see a few frescoes. This Calvary was damaged during the Revolution of 1789 and restored in 1810. A statuary of the XVIIth century made up of polychrome statues in wood represents a precious jewel of this calvary, the unique example in Provence of this popular and sacred type of art. They are displayed in the Cathedral of Vence in summer.

Saint-Raphaël.Chapel of the XIVth century (renewed in 1988). Religious building of the former Malvans’ city which was attached to that of Vence in 1792. Built on a rocky cliff, that chapel has got a wonderful landscape and view on the region. The Midsummer Day is celebrated everey year there.

Close to an imposing cross of Christ, there is the chapel of our Lady of Pity, better known under the name of Sainte Anne. Built at the request of the Bishop of Vence Pierre du Vair, the chapel was named Our Lady of Suffering. Consecrated in 1617, it was intended to shelter the Vençoise confraternity of the mothers of families. In the original rectangular room, 2 chapels shaped as a cross, were added. The one on the left is dedicated to Saint Joseph and the one on the right to Saint Anne. There is a retable in the choir dating from 1700; it is formed with fluted columns on which are displayed painted and sculptured scenes. The wall-bell and the stained glass date from 1871.

The chapel of the White Penitents. As early as the XIIIth century, there was a roadside chapel here, placed under the protection of Saint Agathe, and located on the line of the Old Roman road. Before being enlarged, in the XVIth century, the original building included an apse and a small rectangular nave. Like the Sainte Colombe and Sainte Elisabeth chapels, the front porch was intended to shelter travellers. In the XVIth century, the Mercy confraternity settled there and was called the White Penitents in 1560. It was important in Provence and as early as XIIIth century it had a humanitarian role in poverty, illness and death. The chapel was called Saint Bernardin, Patron of this religious community. In 1614, the Bishop of Vence, Monseigneur Pierre du Vair granted new statutes to this confraternity. He had the building enlarged, just the way it is today, adding a sacristy, a perforated dome of four windows and a small bell. The architectural originality of this chapel rests in its bell-tower: a remarkable dome in polychrome tiles. To be seen, the stalls and the floor which has kept its ancient pavement in glazed octagonal bricks. Restored in 1994, it is today a place of exhibition dedicated to plastic art. In the square Frédéric Mistral, there is a beautiful stone-bench backing on to the building; it comes from the ancient seminary.

To visit the chapels, take an appointment with the responsible people mentioned bellow: