**The history of the Rosaire Chapel 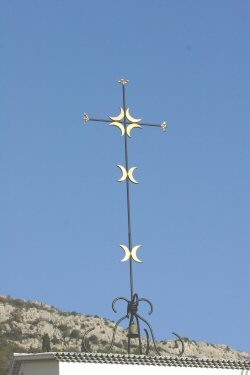 Settled in Vence in the Villa «Le Rêve », from 1943 to 1949, Matisse, employed a young nurse, Monique Bourgeois, who he described as “ a magnificent person” and whose devotion he appreciated very much. She became his confidant and his model (Idol, The green dress and the oranges), she also loved drawing and took great interest in the work of Matisse. However, it was another vocation that came to her calling ; in 1946, this young woman entered into the religious order of the Dominicans and was ordainedSister Jacques-Marie].

Having qualified as a nurse’s aide, she continued to minister care to the painter. In August 1947, Sister Jacques-Marie confided to Matisse her wish to decorate the oratory fitted out by the nuns in one of the rooms in their convent. 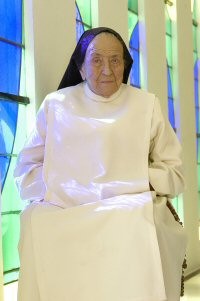 Matisse was more ambitious and designed a project to integrally build a chapel which would be offered to the Dominicans. Surrounded by the spiritual brother Rayssiguier and Father Couturier, under the advice of architects, Auguste Perret and Milon de Peillon, having recourse to the skill of the builders and artisans of Vence, Matisse worked for four years( from 1948-1951) to elaborate the plans of the building and all the details for its decoration, stain glass windows stain glass windows, ceramics, stalls, stoup, cult objects and priestly ornaments. It was the first time that a painter entirely designed every detail of a monument, from the architecture to the furniture and stain glass windows.

The first stone of the chapel was laid and blessed by Monseigneur Rémond, bishop of Nice, the 11th of December 1949. The inauguration and the consecration of Our Lady of Rosaire, took place on the 25th of June 1951. Matisse, ill at the time was unable to attend this ceremony; however he had a text read on his behalf by Father Couturier: “this work required me 4 years of an exclusive and entiring effort and it is the fruit of my whole working life. In spite of all its imperfections I consider it as my masterpiece”

Far from being an accident in the history of Vence, the work of art of Matisse was the highpoint in the confirmation of the vocation of this small town so rich history and which throughout the centuries has been permeated by a creative spirit and love of the arts.

The discrete Chapel can only be recognised by its blue and white tiles and by its wrought iron cross which stands thirteen metres high, ordained with crescent moons and golden flames. It is simple, luminous, spacious and harmonious, as is the interior of the chapel. Positioned between the colours of the stain glass windows, one feels as if one is inside the painting created by Matisse, one of the greatest artists from the beginning of the 20th century.

The alter is situated in the centre of the space and facing the two naves. The colour of the stone in which the chapel was built evokes the colour of the Eucharist (built in stone from the Gard Region of France). The white walls, floor and the ceiling contrast with the stain glass windows which each day allow the day light to penetrate through. The stain glass windows are composed of three colours: yellow (the light of the sun and of God), green (nature) and blue ( the Mediterranean sky). Three big paintings engraved on white ceramic decorate the walls of the chapel. Only the reflection of the stain glass windows project colour on the three compositions. “Saint Dominique”, “The Virgin Mary and Child” and the “Stations of the cross”.

A gallery, exhibiting the initial plans of the chapel as well as the chasubles designed by Henri Matisse, is open in the north wing of the chapel of Rosaire.